The City of Biddeford’s Historic Preservation Ordinance requires that, in most cases, a Certificate of Appropriateness must be issued prior to alterations to buildings and structures in the MSRD 1, MSRD2, and MSRD 3 Zones. Depending on the scale of activity, the application is reviewed by either the Historic Preservation Commission or its delegated authority Subcommittee.

To Apply for a Certificate of Appropriateness complete and return the application below to the Planning and Development Department at City Hall:

Before the advent of a national historic preservation movement in the mid-to-late 20th century, many historically significant buildings were lost to careless redevelopment.  Nationally, historic preservation as a cause gained much momentum and support after the thoughtless demolition New York City’s Pennsylvania Station in 1963, replaced by an underground rail station with Madison Square Garden built above it.  In Maine, similarly, the demolition of Union Station on St John Street in Portland about the same time produced great outcry when developers tore it down and replaced it with a nondescript strip shopping center and parking lot.  Both cities lost great landmarks in the name of progress.  Biddeford itself lost many Mill District buildings when the Maine Energy Recovery Company facility was built on Lincoln Street in the 1980s.

The current historic preservation ordinance, in place since 2013, helps ensure that significant buildings are not lost to insensitive alterations or development.

What Is the Historic Preservation Commission?

The Biddeford Historic Preservation Commission protects the historic and architectural heritage of our city and its historically significant areas, landmarks, and sites, while accepting compatible new construction as needed for the city to grow.

The Code of Ordinances of the City of Biddeford grants the Historic Preservation Commission the authority to review all construction projects in the three Main Street Revitalization District (MSRD) land use zones to ensure compliance with preservation practices. The HPC adheres to the standards set by the U.S. Department of the Interior’s Standards of Rehabilitation while also taking into consideration the City’s Code of Ordinances.

The Commission is made up of seven members who are appointed by the Mayor and confirmed by the City Council, plus a staff person from the Planning and Development Department.

The HPC guards the character of downtown neighborhoods by reviewing construction of new buildings, exterior alterations, and demolition of existing buildings in the three MSRD zones. This work ensures that all construction projects in these zones meet the requirements that maintain the historic context of the surroundings, including the architectural styles, qualities, and construction methods that give them significance. All exterior construction, reconstruction, alteration, restoration, or demolition projects that are visible at pedestrian height from any open space or street must receive a Certificate of Appropriateness from the HPC before Biddeford Code Enforcement will issue a building permit.

Biddeford is home to dozens of historically significant buildings and structures, especially in the downtown. It is the duty of the HPC to protect and defend these structures, and to preserve the essential character of historic neighborhoods in such a way that enhances and improves the value of properties. Historic preservation can play a role in economic development of Biddeford by making it more desirable place to live and work, and by encouraging place-making and place-keeping that can help draw in new visitors to our city.

The HPC considers projects taking place within the MSRD-1, MSRD-2, and MSRD-3 Land Use Zones shown on the map below. Click the image to view a larger map. 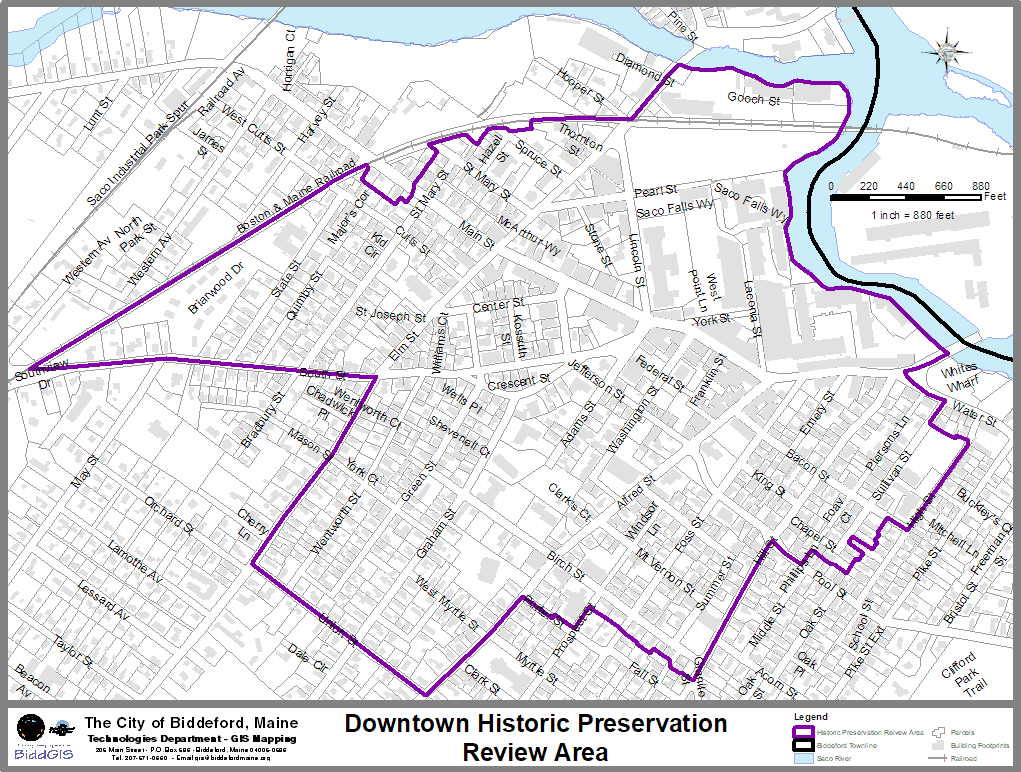 The Historic Preservation Commission meets on the second Wednesday of every month.  An application for Certificate of Appropriateness must be submitted to the Planning and Development Department at City Hall two weeks before the meeting in order to be included on the agenda. Upcoming meetings are listed on the City calendar.