Electrical generation is one of the largest producers of greenhouse gases; currently generating 26% of Maine’s greenhouse gas emissions. Electricity is a secondary source, which means that it comes from an additional nonrenewable resource, typically coal, oil or nuclear power. There are new technologies that use renewable resources to create the same electrical and battery process, these include but are not limited to solar, which harnesses the power of the sun, wind turbines, which harness the power of the wind, micro-hydro which harness the power of water currents and geothermal which harnesses the heat stored in the earth.

The application of these alternatives will greatly decrease the dependency on non-renewable resources, which is a giant step in the right direction toward reducing greenhouse gases and thus decrease the contribution to global climate change.

As we are seeing more conversions to LED lighting we are also seeing a swing towards CFL (compact fluorescent lamps) light bulbs. CFL’s are becoming more popular due to their extended lifetime, found to be 5-10 years longer then the once popular incandescent light bulb. Again we are finding that they are cost effective as well as environmentally respected. CFL’s use one fourth to one third less energy and wattage than incandescents, which means lower operating costs. While the initial cost of CFLs is a bit higher than the popular incandescent light bulbs, the payback period is quite short.

CFL’s and other energy saving lighting appliances can be purchased at any home improvement store. EPA’s (Environmental Protection Agency) Energy Star program reports approved CFL light bulbs use 75% less energy, release 75% less heat, last 10 times longer and can save $30 in electricity over the light bulbs life time. More information on energy efficient lighting and appliances can be found at the Energy Star website.

Converting incandescent light bulbs to more energy efficient light bulbs is easy but there are other electrical and lighting conversions that can be implemented to reduce budget costs as well as harmful emissions. For example, it is important to consider the appropriate use of lighting on streets and in residential and commercial buildings. There are timers and motion sensors that decrease the use of electricity consumed by streetlights room lighting. 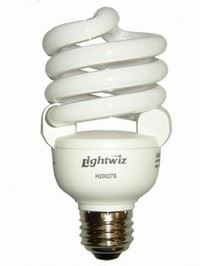 Excess lighting causes light pollution, which not only wastes money but also disrupts a view of the night sky. Using Barrington, NH as an example a community can set up a challenge to incorporate individual retrofitting. This is important for educational awareness as well as environmental purposes. Barrington uses a public barometer measuring the total amount of conversions taking place. Not only does this educate the public passing through the community but it also motivates the individuals in the community to reach the designated goal.